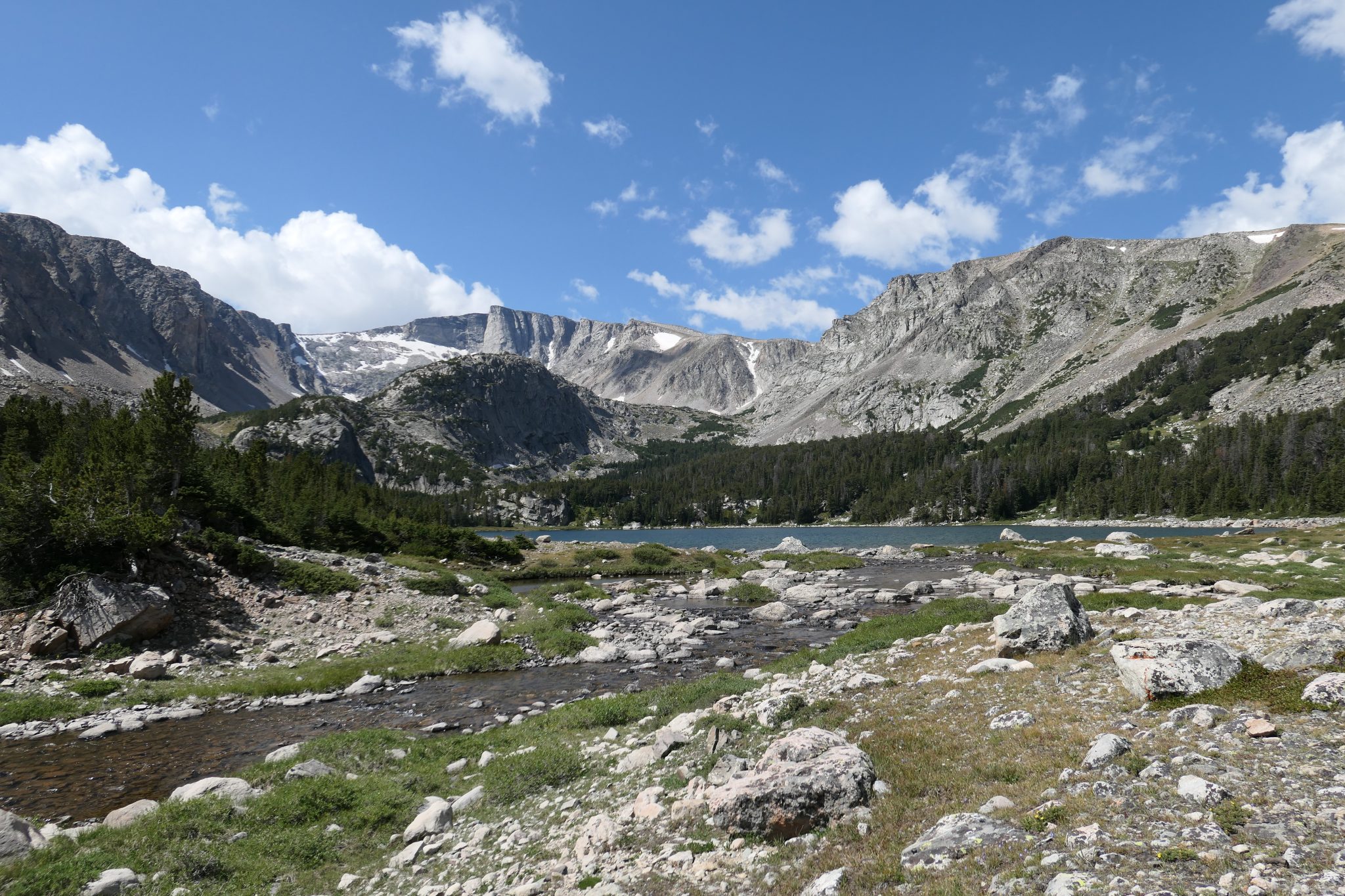 Richard Lyon is a corporate lawyer who moved to Bozeman from Dallas, Texas in 2012. For the past twenty years he has actively participated in volunteer backcountry trail maintenance, weed and erosion control, fence removal, and similar tasks, working with the Forest Service, Park Service, and a number of private volunteer organizations to plan and lead this work. He served as a member of the governance committee of the Gallatin Community Collaborative and remains active in conservation-oriented nonprofit organizations in Bozeman and elsewhere in Montana. He is an avid hiker, backpacker, skier, and flyfisherman in his spare time.

Kimberly has had a long love affair with wild places, spending her entire 37 year career with the US Forest Service as a wilderness and recreation manager. Her introduction to wilderness stewardship began in the 70’s as a Wilderness Ranger in the Hells Canyon NRA and Gospel Hump Wilderness as well as a tour in the Selway Bitterroot Wilderness. Kimberly worked for 25 years as the Coordinating Committee Chairperson for the Absaroka Beartooth and Lee Metcalf Wildernesses in SW Montana and served on the National team that developed many of today’s current wilderness character monitoring protocols and performance standards. Now retired, she gladly spends as much time as possible on foot, skis or in a canoe in wild places, and volunteers to engage youth in outdoors activities nurturing the next generation of wilderness supporters.

Bernie is an emeritus professor of economics at RMC. He is the President of the Billings Community Foundation. He has served on over 20 not-for-profit Boards over the past few years, mainly environmental or cultural. He is currently active in a number of local not-for-profits beyond the BCF, including the Billings Public Library Foundation, the Montana Audubon Center, the Yellowstone County Park Board, the Absaroka-Beartooth Wilderness Foundation, and he is director of the One Book Billings program at the Billings Public Library. In his spare time, he likes to read, walk with his Bernese Mountain dog in local parks and the Beartooth Mountains.

Bernie teaches at Montana State University Billings. His most recent book, Accidental Gravity, an essay collection from Oregon State University Press, won an honorable mention in the 2017 Foreword Indies Book of the Year contest. He edited The Bunch Grass Motel: The Collected Poems of Randall Gloege, a High Plains Book Awards finalist. He is a fellow with the International League of Conservation Writers and was a 2015 ABWF Artist-in-Residence.

Peter is a conservation advocate based in Bozeman. He has worked for The Wilderness Society since 2001 and currently serves as their Senior Regional Director for the Northern Rockies and Alaska. In that role he provides overall strategic, fundraising, and management leadership for the organization’s program over four states.  He has also worked for other conservation non-profits and served on the boards of the Greater Yellowstone Coalition, Yellowstone to Yukon Conservation Initiative, and Gallatin Park chapter of Montana Conservation Voters. He holds bachelor’s degrees from Williams College and a master’s degree in Natural Resource Policy from the University of Michigan. A passionate hiker, climber, and backcountry skier, Peter has fond memories of past trips into the Absaroka Beartooth Wilderness – as well as plans for future outings there with his wife and son.

Aubrey is the eastern Montana field director with Montana Wilderness Association based in Billings. Aubrey works on a variety of campaigns across national forest and Bureau of Land Management landscapes, as well as oversees MWA’s oil and gas policy work. Before joining MWA, Aubrey was a staff attorney with Montana Legal Services Association. A true child of the Rocky Mountain West, she lived and worked in Colorado and Wyoming before making her way north to Montana. She is a lover of public lands and wild spaces of all kinds, from the city park down the street to the Red Lodge Creek Plateau, particularly when accompanied by a canine companion or two.

Bill Hopkins lives in Bozeman and has called the Greater Yellowstone Ecosystem home for over 35 years. He is an avid, four season, back country enthusiast. Bill has explored mountain ranges throughout North America, New Zealand and Europe, yet he maintains a soft spot for the mountains of southwest Montana. Originally from Spokane, he is a 1980 graduate of Western Washington University. He worked for the National Park Service in Yellowstone for 37 years, retiring in 2018. Most of his career was spent working in the back country trails program, managing volunteer and corps groups. He is gratified to have had a career that contributed to greater access to our public lands.

Francine is of the Tsitsistas and Suhtaio people or the Northern Cheyenne Nation. She is a lifelong resident of Montana. Among other things, she is an oral historian, ice and rock climber, skier, and hiker. She also enjoys an off-grid cabin with her husband and beagle near Cooke City. She has served as a director, executive director, and board director for a few Montana nonprofits. She has served as an adjunct instructor, program manager, and program director for the Native American Studies Department at Montana State University. She has also done archeology survey work for the Custer Gallatin National Forest and other private businesses.

Bob Quam has served on the ABWF Board and as secretary/treasurer of the organization since its inception. Now retired from over four decades of work in the spiritual formation of young adults, youth, and families — most of that time as pastor/director for an outdoor ministry based near the heart of the Absaroka Beartooth Wilderness, he has been particularly interested in exploring the intersection of faith traditions with human experience of the wild country, and its part in fostering growth that enlarges the self and draws it more deeply into caring community. He lives in Billings, serving also in several other volunteer capacities.

Advisors to the Board

Jim is a technology geek and an avid outdoor recreationalist. Raised in Minnesota, he spent much of his youth roaming the woods, lakes, sloughs and creeks of south central Minnesota. Jim attended college at Minnesota State University at Mankato. His hobbies include fishing, biking, snowboarding, hiking, birding and most of all spending time with his wife and daughter. After spending 15 years in Montana recreating in and around the AB Wilderness, he relocated to Denver, CO in 2018. Jim’s excited to provide technical guidance to the operations of the ABWF and to spread the word of the AB Wilderness and its splendors.

Jessica is a Human Resources Manager at Red Lodge Mountain. At an early age Jess was immersed in the wilds around Livingston, MT. After a short stint in Tucson, AZ, she realized her heart was in Montana and returned to Missoula to study the relationship between people and nature (Wilderness/Recreation Management). Her first year of college at the University of Montana also led to her first position with the Forest Service on a Trail Crew in the Absarokas. A Wilderness Ranger position brought her to the Beartooth Mountains for a summer (that turned into nine), where she immersed herself in Wilderness and Trails work. Jess loves to run, eat donuts, and hang out with her family. After a seven year hiatus she is excited to again be involved in Wilderness stewardship and help protect the Absaroka Beartooth Wilderness.

Ecologist Jesse Logan is a recognized authority on the condition of Greater Yellowstone’s whitebark pine forests and the communities they support. After retiring in 2006 from a career in academia (Colorado State University and Virginia Tech.) and the US Forest Service (Rocky Mountain Research Station), he continues research and advocacy for high elevation ecosystems of the Greater Yellowstone. A primary interest in this regard is the Absaroka/Beartooth wilderness, the largest contiguous area above 10,000 ft. in the continental United States. In summer he is a Contract Instructor for Yellowstone Forever, and is a backcountry ski guide during winter, working out of Cooke City, MT for Yellowstone Ski Tours and Beartooth Powder Guides.