The north/south-running Absaroka Mountains derive their name from the Crow Tribe’s name for themselves in their native-language , the Apsaalooké, or “Children of the Large-Beaked Bird.” Explorers of European descent interpreted this to mean “Crow.” This dramatic range of mountains rising up from the headwaters of the Yellowstone River forms the western part of the Absaroka-Beartooth Wilderness and is volcanic in origin. The Absarokas are the spiny backdrop for the eastern side of the Paradise Valley, from Livingston to Gardiner, that leads to Yellowstone National Park. Many wonder how to pronounce “Absaroka;” both Ab-suh-RO’-kuh or Ab-ZORE’-kuh are common, the latter being the preferred pronunciation of the old-timers and locals.

Far-older geologically are the Beartooth Mountains forming the eastern portion of the Wilderness, and aptly named from a rock arête easily visible from the spectacular Beartooth Highway. Rocks 3.8 billion years old have been found here. High plateaus, glaciers, lakes, and 12,000 ft. peaks grace the landscape.

But with Yellowstone and so many other wild areas of the 20-million acre Greater Yellowstone Ecosystem around, what makes the Absaroka-Beartooth Wilderness unique?

The highest mountains in Montana are here–numerous 11- and 12-thousand foot peaks adorn the rugged landscape, culminating in Granite Peak, at 12,799 feet above sea level, the highest point in Montana. Nestled amongst these high peaks are reclusive glaciers, like the Castle Rock, Snowbank and Grasshopper Glaciers that remain active to this day. Hundreds upon hundreds of lakes sparkle across the area’s broad landscape. And tundra… There is more contiguous alpine acreage above treeline on the high plateaus than anywhere else in North America.

Built by the Civilian Conservation Corps in the mid 1930’s, the Beartooth Highway is, for many, their first introduction to the A-B Wilderness. Along with the Going-to-the-Sun Highway in Montana, and Trail Ridge Road in Colorado, the Beartooth “All-American Road” is one of the most jaw-dropping high-elevation drives in the world. When it is open (between Memorial Day and early October), it serves as the northeast entrance to Cooke City and Yellowstone National Park.

Did you know the wild country of the Absaroka-Beartooth Wilderness form the headwaters of the Yellowstone River? The Yellowstone remains the longest undammed river in the Lower 48–over 600 miles from where it rises in the A-B to where it joins the Missouri in North Dakota. The Yellowstone Cutthroat Trout is the only true native trout species to this area and is making a comeback in the streams and rivers flowing out of the A-B. And vegetation…Some of the healthiest whitebark pine stands are here too; this is a species considered by many to be a threatened tree species, which is concerning due to their ecological importance to Clark’s Nutcrackers, red squirrels, and the Grizzly Bear. Yet in the the Absaroka and Beartooth ranges, whitebarks seem to thrive better in protected habitat than elsewhere across its limited range. You will find over 400 species of plants here; some are common only in the arctic yet intermix here with Rocky Mountain alpine vegetation in an unparalleled floral convergence dating back to the Ice Ages.

Finally, and perhaps most profoundly, the Absaroka-Beartooth Wilderness is still very much today like the authors of the Wilderness Act of 1964 envisioned Wilderness to be: “An area where the earth and its community of life are untrammeled by man, where man himself is a visitor who does not remain.” Undeveloped. Retaining its primeval character. Having outstanding opportunities for solitude. A source of primitive and unconfined recreation. With the imprint of man’s work substantially unnoticeable… These are phrases right out of the text of the Wilderness Act. For those who visit the Absaroka-Beartooth Wilderness Area, quintessential solitude and pristine wild land awaits.

The ABWF is devoted to seeing the A-B Wilderness remain as wild as it always has been. Please help us keep it that way!

“I believe that at least in the present phase of our civilization we have a profound, a fundamental need for areas of wilderness – a need that is not only recreational and spiritual but also educational and scientific, and withal essential to a true understanding of ourselves, our culture, our own natures, and our place in all nature.

This need is for areas of the earth within which we stand without our mechanisms that make us immediate masters over our environment – areas of wild nature in which we sense ourselves to be, what in fact I believe we are, dependent members of an interdependent community of living creatures that together derive their existence from the Sun.

By very definition this wilderness is a need. The idea of wilderness as an area without man’s influence is man’s own concept. Its values are human values. Its preservation is a purpose that arises out of man’s own sense of his fundamental needs.”

The ABWF is seeking two Wilderness Steward Interns for summer 2021. Each steward will work with U.S. Forest Service trail crews and ABWF staff and volunteers in the Custer-Gallatin National Forest’s Absaroka-Beartooth Wilderness. Click here to learn more and apply!

Cozy up and learn something new with ABWF’s Winter Webinar Series! Every month this winter we will be hosting a FREE webinar with topics ranging from wildlife snow tracking to baking treats to keep you warm on the trail and more. Click here to see the line up and register.

The “Atlas of the A-B Wilderness” is NOW an award-winning book!  Voices of Yellowstone’s Capstone…was recently a Gold Medal selection by the Independent Publisher’s Book Awards!  We are also one of three finalists for a High Plains Book Award in non-fiction!  Order NOW online!  Read a review or two! 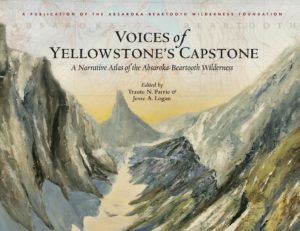 Click on the image of the book above to take you to our store.

Read how we work together with the Beartooth Backcountry Horsemen on our trail projects!

We always have opportunities for you to volunteer, both on trails and with other, just as important tasks!

Please consider supporting our organization. Your money goes directly to projects that make a difference on the ground in the A-B Wilderness.  Thank you!

Or you can become a member!