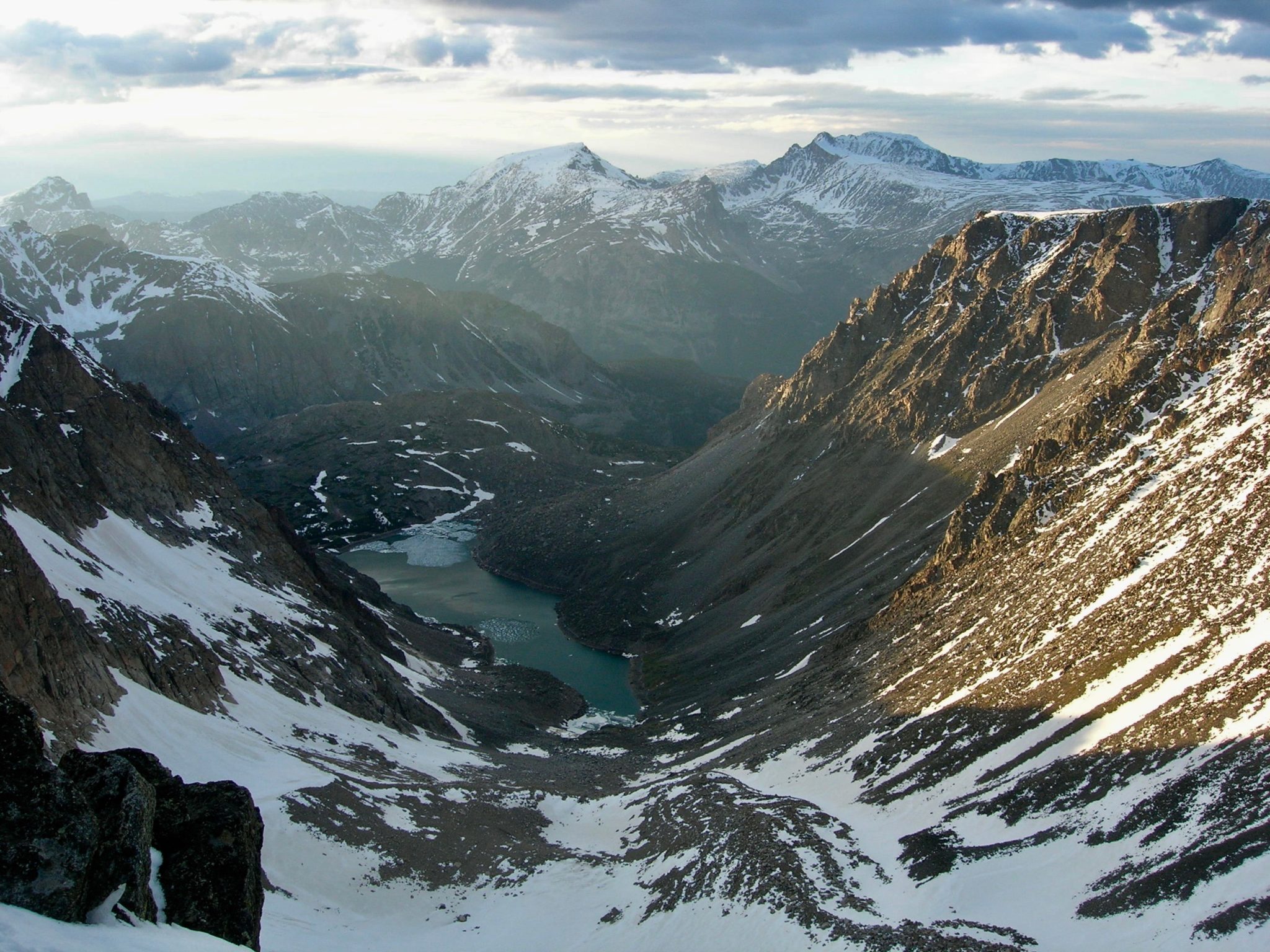 Geology of the Beartooth Mountains

Topographically, the Beartooths rise from about 6000 feet above sea level on the east and northeast to rugged mountains more than 11,000 feet high within a distance of 25 miles southwestward. Granite Peak, the highest point in Montana at 12,799 feet, is the highest of many high peaks in the Beartooths. It is usually visible from the Beartooth Pass, the scenic highway which runs from Red Lodge, Montana, to the northeast entrance of Yellowstone Park.

Geologically, the large central core of the Beartooths is composed chiefly of complex metamorphic rocks of Precambrian age which have in part been dated radiometrically as more than 2 billion years old. The foothills of the Beartooths, as well as a few small buttes in the uplands, are sedimentary rocks, mainly limestones and dolomites of Paleozoic age. Unconsolidated glacial sands and gravels, less than 2 million years old, are widespread in the deeply eroded valleys of the Beartooths.

The Beartooth Mountain range is located in south-central Montana and adjacent northwestern Wyoming. It is bordered on the east and southeast by the Bighorn Basin and on the west and southwest by the Absaroka Range and the Yellowstone Park Plateau. (The Absaroka Beartooth Wilderness area encompasses both the Beartooth and Absaroka Mountains.)

In their internal structure, most of the Rocky Mountains result from the wrinkling of the Earth’s crust near the beginning of the Cenozoic Era, probably from movement of crustal plates. The wrinkling produced geologic folds known as anticlines (upwarps) and synclines (downwarps). Some of the folds were distorted to the breaking point, resulting in fractures along which movements took place (e.g. the Beartooth Front). These are known as faults. Prior to the wrinkling of the crust, the entire Rocky Mountain region had been below sea level. This Late Cretaceous seaway extended from the present Gulf of Mexico to the Arctic Ocean. The uplift and wrinkling of the crust slowly pushed this seaway out of the entire western interior. Never again since this withdrawal has the Rocky Mountain region been invaded by marine waters.

The marine rocks of the Beartooths, of both Paleozoic and Mesozoic ages, once extended unbroken across the entire Beartooth-Bighorn region. The regional crustal deformation resulted in the uplift, folding, and breaking of this thick cover of sedimentary rocks. These relatively soft rocks were subsequently almost completely removed by stream erosion from the higher portions of the uplifts. This has resulted in the exposure of the underlying Precambrian metamorphic rocks whose hardness has resisted erosion and left them at their present heights in the massive core of the Beartooths.

The topographic relief in the Beartooths has been accentuated by extensive glacial erosion. Long, narrow valley glaciers have widened and deepened the major stream-eroded valleys to broad U-shaped profiles with circular depressions (cirques) at their headwaters. In a few of these cirques, small glaciers are still present as frigid remnants of the “Ice Age” of the recent past (the so-called Pleistocene Epoch).

The Beartooth Mountains take their name from the sharp, toothy peaks that characterize this dramatic and dynamic mountain range.